Shoal Waters Press is a small, independent publisher specializing in mystery novels by Maine authors. Our particular interest lies with stories which weave the seacoast, sailing, and boats into their plots.

We’re located in Midcoast Maine, which is situated roughly between Bath to the south and Belfast to the north. The charm and beauty of the area has inspired countless authors, and that inspiration is what we hope to capture.

Our aim is to use the latest in “print-on-demand” and paperless e-book technology to minimize wasted trees and energy, while providing the reader with quality books at a reasonable cost.

Shoal Waters Press is pleased to introduce Abracadabra, the first book in a new Buzzards Bay Mystery series, set in post-World War 2 Cape Cod. The title is available now on your Kindle, and will be coming out in paperback later this year. 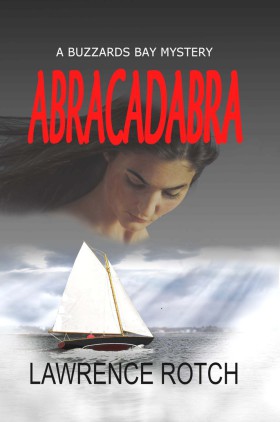 The end of World War 2 brings a lot of changes to the sleepy waterfront village of Wissonet on Buzzards Bay. Sadly, the tradition-bound town isn't a place that welcomes change easily. Indeed, there are some who will go to any length, including murder-or worse- to preserve the old ways.

Trouble starts when the town is shaken to its core by the brutal murder of Commodore Cummings, its richest and most influential citizen, and the last direct descendant of the town's founding family.

When John Wendell, a relative newcomer to Wissonet, and a man who is still haunted by wartime memories, becomes involved in the murder investigation, he makes enemies quickly.

To make matters worse, John's wife, Mary, a lifelong resident, finds herself caught up in an ancient evil where truth and fantisy seem to becoem one. As the dangers get more deadly, Mary finds herself suspecting everybody around her of murder-even her own husband.

When the killer begins to stalk them, John and Mary must confront the demons of their own pasts as they stir up a daedly cauldren of witchcraft, greed and revenge.